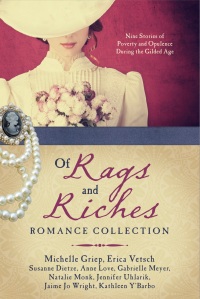 Of Rags And Riches Romance Collection: 9 Stories of Poverty and Opulence In The Gilded Age

Journey along in nine historical romances with those who lives are transformed by the opulence, growth, and great changes taking place in America’s Gilded Age. Nine couples meet during these exhilarating times and work to build a future together through fighting for social reform, celebrating new opportunities for leisure activities, taking advantage of economic growth and new inventions, and more. Watch as these romances develop and legacies of faith and love are formed.

At her uncle’s call, Dara Forsythe followed her cousin Becca onto the rear platform of their private railcar. The sky pressed in, cold, gray, and dreary, just like her mood. The town—if she could call it such—was a collection of dingy canvas tents of varying sizes, heavy-laden wagons, and muddy paths.

Her new home. No paved streets. No store windows. Goodness, not even a permanent building within sight. Her throat constricted.

This was not Boston.

People milled about, some waiting to meet the train, others scurrying between tents. She scanned every face. Nowhere did she see the one she longed for. Her heart sank.

Papa had begged her to come west after her mother’s untimely death, and hoping to rekindle the bond they’d once shared, she agreed to leave the comfort of Boston and brave the journey west. Yet the niggling fear that things would never be the same was only perpetuated when she saw he wasn’t there to meet them. They’d sent word of their expected arrival. The least he could have done was be on time.

A cool wind whipped around the passenger car, and Dara took the hand her uncle, Dr. William Chenoweth, offered, and descended to the mud below.

“Let me help you, Matilde.” Uncle William assisted the pretty young freedwoman down the steps.

“So this is it?” Matilde stepped close and eyed the camp.

Becca looped her arm in Dara’s. “I knew this would be an adventure, but I never imagined it would be so. . .primitive.”

“Don’t you fret none, Miss Dara.” Matilde smiled. “The dear Lord’ll make this turn out right.”

Mute, Dara nodded at her friend.

“I’ll help you, Doctor William.” Matilde trotted after him.

Dara hoisted her skirt from the mud and followed. Thank goodness Uncle William had agreed to leave his Boston medical practice to become a frontier doctor. Having him and Becca here would help ease her transition, and she’d be lost without Matilde. Thank You for them all, Lord.

The one she missed most was Mama. How did one continue after such a crushing loss? Dara’s aunt Mary had died when Becca was three, leaving Becca with almost no memories of her. Dara, on the other hand, had lost Mama to illness just four months earlier at seventeen.

“You look absolutely mortified.” Becca’s grip on her arm tightened. “Don’t worry. This place has to get better.”

“The place is only part of it. I miss Mama.”

Grief was her near-constant companion, threatening to drag her into a dark pit and never let go. The only time it didn’t plague her was when something triggered memories of her mother’s fortitude and spirit. Always graceful. Always a lady. Yet never one to back away from what was right. Those characteristics had pushed Mama to join the abolition movement before the war, she and Dara both working for the cause. If only she could emulate Mama’s traits, keep her character and spirit alive. But how in this backward place?

Uncle William and Matilde stopped beside the baggage car, calling to one of the handlers inside. Dara steered Becca to an out-of-the-way spot. The air sparked with chatter and busyness. Men bustled around the freight cars, unloading crates. Dara sighed as an empty ache stole through her. This might be busy for the Dakota Territory, but it was interminably slow compared with Boston.

The chug of a steam engine diverted her attention, and she watched as the hulking machine backed toward the caboose. Mr. Marston and Mr. Adgate, the two richly dressed, distinguished gentlemen whom she’d met on the train, called orders to a few baggage handlers. The dust-clad workers transferred several large wooden crates labeled Blankets from the last freight car into the backs of several wagons. Once finished, the workers drove the wagons away, and Mr. Marston released the coupling arm that joined the freight car and caboose to the train. As she and Becca watched the process, a stout, slovenly giant stepped in front of them.

“Ain’t never seen the likes of you two before.” He reeked of sweat and spirits.

Becca’s cheeks paled. Dara made no response except to dart a glance toward Uncle William and Matilde. Gone.

Heart hammering, Dara turned them away from the man and searched for Uncle William. Of course, neither he—nor Papa—were anywhere to be found.

“I said. . .” He stepped in front of them again. “Ain’t seen you two around these parts before.”

Trembling, she turned. “You’re being quite rude, sir.”

“And you’re right pretty. Where you from?”

How could Papa not have come to meet them? If he’d been here, this drunken scoundrel wouldn’t have had opportunity to approach them. She faced him. “I will thank you to leave us alone.”

An average-height man ambled their way, half an apple in one hand, a large knife and an apple slice in the other. She barely breathed as he lifted the slice to his mouth then wiped the blade on his pants.

“You gonna answer me?” The drunken man’s bawling barely registered as the other man sheathed the knife and smiled around the bite of fruit.

His warm brown eyes captivated her. “Pardon us.” Hissing steam and grinding metal nearly drowned his words as he guided the belligerent fellow away.

Her cheeks warmed, and she clamped her mouth shut. The engine coupled to the caboose and freight car and chugged away from the makeshift train stop. When she focused again on their handsome rescuer, he patted the drunken man’s shoulder and sent him on his way. The brown-eyed man, perhaps in his middle twenties, was simply dressed. His clothes were neat but patched and well-worn. He was fairly clean with dark brown hair and clean-shaven face. A tattered slouch hat topped his ensemble.

Maybe there was a bit of civilization to be found in this God-forsaken land after all.

Still trembling, she smiled. “Thank you, sir. That was very kind of you.” Galloping hoofbeats pounded in the distance behind her.

A charming smile spread across his face. “My pleasure, ma’am. No self-respecting Georgia boy’d let that fella accost such a fine pair of ladies.” He flicked a glance past her, eyes narrowing.

Her brow furrowed. A Southerner?

“Dara-girl!” The familiar voice boomed across the distance.

He marched through the thinning crowd toward them. Dara grabbed Becca’s hand and darted toward her father.

They’d barely gone five steps when something slammed into her, and she lurched face-first into the cold mud. With a startled cry, Dara reared back, tried to get up. Beside her, Becca also flailed in an attempt to rise. A weight crushed her farther into the goo.

“Stay down!” The Southerner’s words twanged with urgency.

A light flashed, and an earth-shattering concussion rocked her surroundings, sucking the oxygen away. Dara clamped her hands against her ears, too late to block the deafening roar.